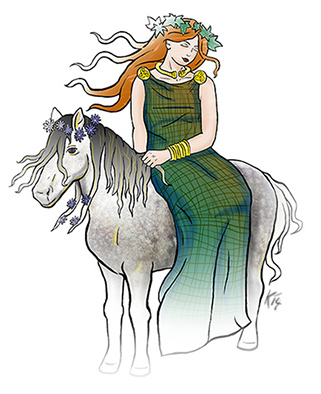 The most famous tale about the Irish goddess Macha refers to her as the daughter of the mysterious Sainrith mac Imbaith – in other words she is the Daughter of ‘Sainrith Son of the Sea’.  She came from nowhere to live at a farmstead and her powers brought fertility and prosperity. She named an area as Emain Macha, ‘Macha’s twins’, which, in turn, became the ancient capital of Ulster. Other areas in Ireland named after this goddess also include Mag Macha, the Plain of Macha, and Ard Macha, the Hill of Macha.

In my draft illustration above Macha rides Liath Macha, ‘Macha’s Grey’, who is one of the horses belonging to the great hero Cú Chulainn. Here I depict Liath as a grey mare pony. Macha’s torque is based on the one found in the Broighter hoard, Limavady, County Derry, while her tunic fasteners are based on the bronze disc with triskele found in the River Bann near Loughan Island, County Derry. Additionally, her bracelets are based on the Bronze Age golden armlets that were found deep within a bog at Derrinboy in County Offaly.